The nice thing with having this Airblog is triggering response. Most of the time on subjects way back in time, when, as a young boy I was much more frequently plane spotting.

I recently received a mail from Norbert Lambriex, Creative & Director of Lila Design, regarding PH-KRI, which I spotted years ago at Maastricht (see report EHBK 19760807 and EHBK 19760809. It was the first airplane he was flown with, in 1972. I spotted the Cessna only twice, in 1976. One of those two days, 9 August, was for me a special day. As it was the first time I ever was flown, with NLM’s Fokker F.27 PH-KFG, from Maastricht (EHBK), via Eindhoven (EHEH) to Schiphol (EHAM).

So PH-KRI is linking these events to Norbert, whose agency designed liveries for companies like VLM and Air Holland. He kindly offered me this illustration for my weblog:

Another mail I did receive was from Thierry Detable, webmaster of www.blimp-n2a.com, responding to my picture of blimp N2A, temporarily based on Rotterdam (see report EHRD 19790909). He is collecting all kind of info on this ship in particular, which flew in Europe from 1972 till 1986 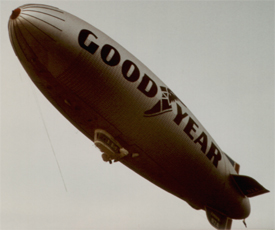