In August 2007 I received a picture by Stefan De Sutter of OO-ZDM, a Siren C.305 Edelweiss. According to my logs I noted this sailplane at Schaffen-Diest, in 1981. I decided to have a closer look at my pictures because the V-tailed plane was that rare, that I should have remembered or pictured it somehow. And it turned out I had to correct, after 26 years, my log. It had been OO-ZOM, a very common K.8B, luckily partly visible behind Piper OO-GDG. From the picture it is clear that a misread was not unlikely. And also the painting itself of this “O” seems to have been a difficult task on that angular hulk. OO-ZDM was destroyed, but this OO-ZOM is still around at Schaffen, with the Diest Aero Club.

Mid seventies British Air Ferries (BAF) was replacing its Carvairs for regular passenger planes. As a kid I remember those Carvairs unloading cars, for which a mobile hoist was used. Boats ferrying cars were rare, and motorways not that abundant as nowadays. So ferrying a car across the North Sea through the air seemed a reasonable and time-sparing idea. But in the seventies, this all changed, and BAF switched from mixed-freight/car ferry services to regular passenger transport.

As rare as a Carvair, almost as rare was its replacement, the Handley Page Herald, of which there were only 50 built. Designed in the fifties as a DC-3 replacement, its prototype flew in 1955. Technically it was an advanced plane, with smooth flying characteristics at low speed due to its use of slots, a Handley-Page invention, now present in all modern airplanes.

The Herald had to rival with the Fokker F-27 and HS.748, but heavy changes to fullfill requirements of airliners late in the development phase turned out fatal for sales. And the privately owned Handley Page company could no longer compete with the state supported companies. It went bankrupt in 1970.

See here for a full overview of all Heralds I logged myself. 25 aircraft, 50% of all there were ever built.

In November 2006 I did receive a picture taken by Andreas Klima of TG-AZE, which I once logged as BAF’s G-BDZV. It shows TG-AZE in September 1989 at the airport of Guatemala City (GUA), ready for its flight to Flores (FRS). Since, it has probably been scrapped in Guatemala City in 2001.

BAF also disappeared. It once was, like me, a regular visitor to Rotterdam (EHRD) but in 1979 its operations were assumed by British Island Airways (BIA). In 1980 four regional airlines, including BIA, went into Air UK. In 1995 KLM acquired the majority of shares, and Air UK became KLM UK, in 1998. Operations were split up into a low budget carrier, Buzz, in 2000. The remaining operations were integrated in KLM Cityhopper in 2003, while Buzz was sold then to Ryanair.

It was cold back in January 2001 when walked all the way from the station at Versailles to the airfield at St.Cyr. Luckily I was permitted to visit the hangars. In a corner of the field, a few derelict planes were stored, one of them on a trailer, Rallye F-BPQY. See here for the full log.

In Septemer 2006 I did receive a mail from François Gonet. It appeared his grandfather Marcel had flown this plane between 1965/1975. 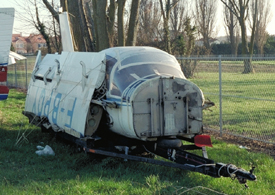